Today I looked at my son and realized one day he is going to ask me and his dad if we remember where we were on 9/11.

I realized one day I’m going to have to explain to him about the evil that exists in this world. I won’t be able to shield him from it forever as much as I would like to.

I’ll have to tell him I woke up that day like any other, took a shower and got dressed for work. I was living alone at the time and working my way through some personal issues that were consuming my mind that morning. I was 22 years old.

I had to be at work at 9am and was running a few minutes behind as usual. I got in my car, tape playing (I’m sure I’ll have to explain what a tape is to him), and headed to work. It was right at 9 o’clock and I noticed there were no other cars on the road. I thought maybe it was a holiday and I didn’t realize it. I kept driving along and things just seemed off.

I switched over to the radio and heard a very serious voice and I wasn’t sure what they were talking about. As I listened, I realized there had been an airplane crash but at the point I was listening, they weren’t really giving details, they were more in shock and at a loss for words. It was a strange few moments as I continued on to work because I didn’t understand why they were reporting like this on an airplane crash and then I heard the part about it being into the twin towers in New York.

I pulled in to work, sun shining, temperature comfortable, light breeze and puffy clouds in the sky. No noise. No traffic and no air noise. No planes.

I went in the front door of the building on Dayton Blvd into my dad’s upholstery shop and when he heard the door ding, he walked out of his office and gave me that look. He didn’t say a word but just looked at me.

I asked, “Am I hearing right? Was there a plane that crashed into one of the twin towers in New York?”

He said “Yes,” and turned on the TV in the front room. The news was on and reporting. We stood silently and watched trying to comprehend what was going on.

While we watched they reported a second plane. I said “This is no accident.”

Then a little while later the report about the pentagon.

His response surprised me. He said, “I don’t know,” and shook his head. He always had an answer. Always. I wasn’t scared until I heard him without one.

The day was solemn. We didn’t talk much, just listened to the news reports and worked at a little slower pace than normal. We didn’t have a single customer that day, not that we expected any. I’m sure, as many others, I spent the day wondering what all was going to happen. Are we at war here at home? Are we about to be? We waited for the media to tell us yes or no.

We left that day and my dad told me he loved me. I told him I loved him. He said if anything happened, head to the house.

I went home and stayed glued to the television. I watched the people on the screen terrified and I cried. I cried a lot. I prayed even though at that time I wasn’t at a place in my life where I prayed much at all. 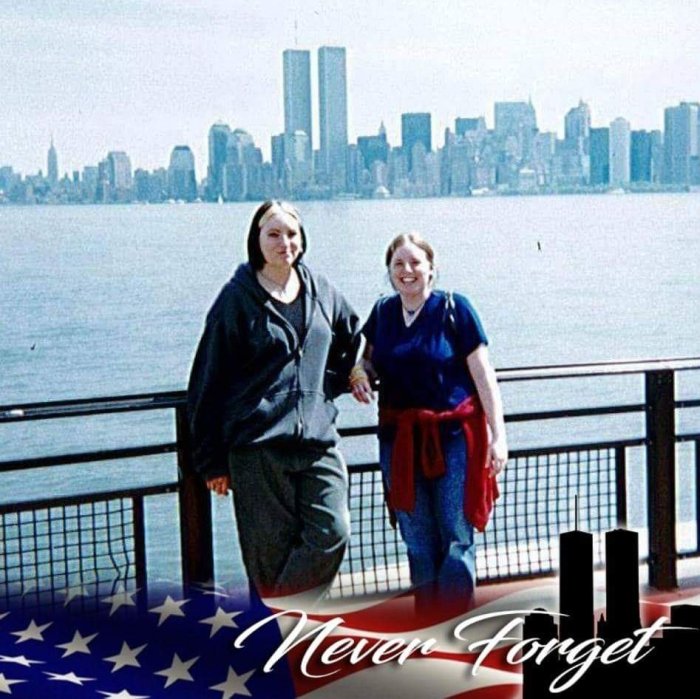 I remembered being there not long before. This picture was taken earlier that year when I went for a weekend with my friend and her aunt. I wondered if I knew anyone who was in the buildings or those who were nearby. I cried for the families waiting to hear if their loved ones were okay. I couldn’t imagine that city, the way I remembered it, forever changed.

I thought of the ferry ride we took and seeing Ellis island off in the distance, the port through which many of us came to be American citizens generations before. The place where many became free to live their dream. The attack was truly an attack on freedom because it was meant to instill fear and those who live in fear do not live free.

The next few weeks were spent wondering if there would be other attacks and if we were really safe anywhere. Those weeks turned into months, now years.

Those who knew the world before 9/11 can say it’s different now, afterwards. Try taking a flight somewhere and we still see the residue of what 9/11 did to us as a country, as a world.

But after all that, I’ll be able to tell my son how people, for a while, set their differences aside and were a little more compassionate towards one another. For a while, love was shown between strangers by treating each other as we should. For a while, people realized how fleeting life truly is and acted accordingly, but, how quickly we forget.

We remember a date, the news reports, the images, but we can’t remember how to be compassionate. We are back in a place of arguing over our leaders instead of praying for them, we get more excited about games on television instead of checking on our neighbors, we resort to physical contact when someone cuts us off on the road instead of using mercy and grace that we are shown every day.

How quickly we forget. To my son, always be compassionate. Always err on the side of love.

This site uses Akismet to reduce spam. Learn how your comment data is processed.