It’s been a busy week/weekend. My husband and I are in a very strange season of life right now. At least, it seems strange because we’ve never been in one like this before.

I don’t even know how to explain it with words which makes it even more difficult to maneuver because, well, I call myself a writer. A writer that can’t describe a situation. That should tell you how strange this season is.

The best I can do is to describe it as a surprise party that you know is coming but you have no idea what that surprise party will consist of or who is going to show up. Cupcakes or sheet cake? Games or music? Maybe both. Punch and water or cans of pop? Who knows! All you know is that a party is coming and if you have slight anxiety issues like I do, knowing it’s coming is making it worse.

I would rather be completely surprised than to know I have a surprise coming. I want something to fly at me out of left field and smack me right in the mouth. I can deal with that. I can react to that. I can live in the moment.

If that surprise is so large however, that I can see it coming from a mile away…I scramble. Picture a giant softball, like the size of the moon, flying in my direction. Really picture this now, you are going to laugh.

It’s flying at me and I’m standing in the middle of a field and I can watch the shadow of this thing inch its way towards me, blocking out the sun, the stars and the clouds. That’s the enormity of this surprise.

What am I doing? Running all over the field, hands flailing, zig-zagging across the grass like the largest alligator you’ve ever seen is after me.

Go ahead, laugh. I am. That mental picture is hilarious. Just to help, I made a sketch. Don’t question the mountains. Or the trees. Or my stick figure abilities. 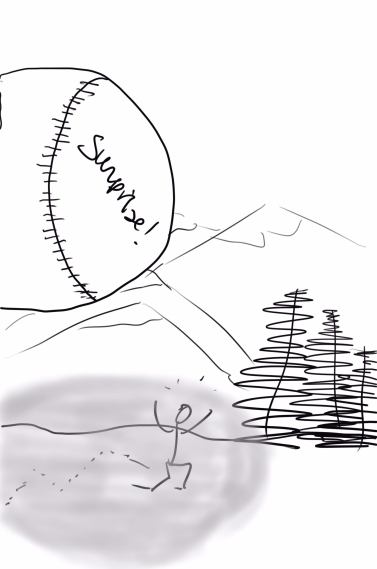 This is how I react to something that I have just a hint of or an idea of.

I would rather be facing the other way, playing in the sand and turn around just as the giant softball hits me in the face. I don’t like the wait.

This season though, I haven’t been running. I’ve been walking this out in a way I never have before. I’ve been steadfast. My flesh wants to run but my spirit says, “Wait, be patient.”

Those words have been with me since November of last year. Scripture has been put in front of me to encourage my wait. Lines in movies have jumped off the screen and flew through the air, planting their dagger into my heart. I hear His voice whisper, “Wait.” I was at the bookstore and turned a 180 on my heel to have the book, When God Says Wait by Elizabeth Laing Thompson, staring me in the face. I bought it, no hesitation. I’ve been reading it. I was already in tears by page 12 because of how true her words are.

I’m growing weary. I’m struggling. That aggravates me even more because I am a strong person. I have endurance. I have follow through. I can fight a good fight. But this season is teaching me and showing me things I need and it is difficult. Plain and simple.

I believe this is why so many people become complacent in life. They can’t handle the wait. They give up. They make things happen. They take an alternate route. They decide what’s best for them and go with it because it gives a false sense of security. Imagine what could have been had they waited.

I’m waiting on God. It might not be easy, I might be struggling, I may be growing weary, but each day He gives me grace and mercy to continue on. In my weariness, I seek Him more. In my struggle, I search for His voice. In my uncertainty, I know His Word and I know my God…He is not uncertain.

Even while there is a season of “waiting” going on in our lives, the other areas of our lives have continued on. My husband was diagnosed with an auto-immune disease the first year we were married (almost 10 years ago) called sarcoidosis. When diagnosed he was at the end of stage three on the cusp of stage four. Not a good place to be. We had doctors appointments every three months the first couple of years then it dropped to every six months and eventually annual appointments as his health improved. The doctor we see was originally at Vanderbilt in Nashville and now in Franklin. Either way a 2.5 hour drive for us there and a 2.5 hour drive home.

He is in remission and has been the past three years. The most current visit, which took place this past Monday, he had a pulmonary lung function test and it was so good the doctor said, “He’s still in remission. With those results, better than remission.”

I don’t know about you but “better than remission” sounds a lot like “healed” to me.

We prayed in the very beginning that he be healed and from that point forward never asked God for his healing again. We thanked Him for it and considered it done. Imagine that, it worked.

Even in that however, we waited. The long drives, the waiting rooms, the tests, the drives home, all the while anticipating the word “remission” to come out of his doctor’s mouth.

So, I may be struggling and growing weary in some moments right now but I look back over the last ten years and remember the moments we grew weary in his healing. The moments we struggled and grasped at our belief in what we prayed. The times when I was alone and all I could do was let the tears fall and ask God, “You gave me a good husband. You wouldn’t give me a good husband to take him away, would you?”

Desperation overtook me in those moments but then the Holy Spirit, my Comforter, would overtake me right after.

We persevered. We overcame. We claimed our victory.

In this, we are persevering. We have overcome. We are claiming our victory.

I know on the other side of this, once that softball hits and causes the giant crater, there will be such a testimony from it. I hang on to that promise because testifying of who He is and how good He is, is one of my favorite things.

This site uses Akismet to reduce spam. Learn how your comment data is processed.